The final version of the Agreement on Reforming Research Assessment, co-created with over 350+ organisations from 40 countries and published on 20 July this year, was presented and officially opened for signature on 28 September, during a plenary session of the European Research and Innovation Days 2022.

During this session, speakers including Mariya Gabriel (Commissioner for Innovation, Research, Culture, Education and Youth), Sylvie Retailleau (French Minister for Higher Education and Research), Lidia Borrell-Damián (Secretary General of Science Europe), Paul Boyle (Vice-President of the European University Association – EUA), and Anna Panagopoulou (Director of European Research Area & Innovation in the European Commission) described the Agreement as a catalyzer of change for a better and brighter R&I system in Europe and beyond and called on the scientific community at large to support this transformative initiative. Since the publication of the Agreement, and even before the official opening of signatures, 51 organisations from across Europe had already declared their commitment to sign the Agreement, and they were announced as “early signatories” of the Agreement.

The session also saw the unveiling of www.coara.eu, the new website of the future Coalition for Advancing Research Assessment (CoARA). This site will serve as the main source of information on the Agreement and Coalition, and allow signatures to be collected. 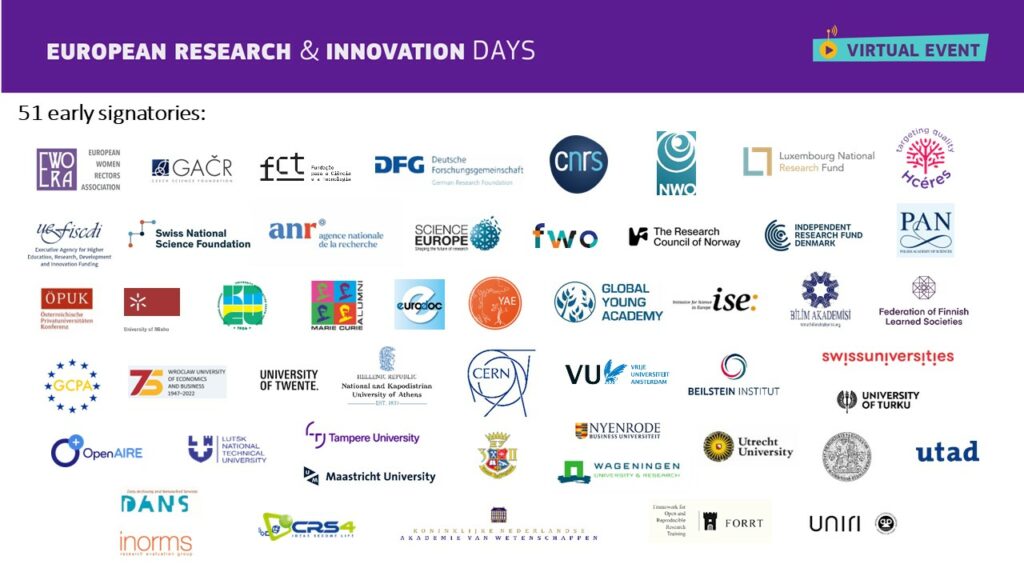 Signatories of the Agreement and future members of the Coalition from across the world will include[1]:

Representatives from the European University Association (EUA), Science Europe and the European Commission are now drafting the documents that describe the modalities of governance, operation and funding of the future Coalition, with the advice from an Implementation Group made of representatives from 10 organisations from across Europe:

These draft documents will be presented and discussed with all interested stakeholder organisations at a new Stakeholder Assembly meeting mid-October 2022. Their adoption is expected during the first meeting of the General Assembly of members of the Coalition, the “Constitutive Assembly”, followed by elections for the main governing positions, and the launch of the activities of the Coalition. The Constitutive Assembly is expected to take place early December 2022.

[1] To note that organisations meeting the following conditions but without a legal personality will be able to sign the Agreement and join the Coalition.